Highs and Lows and Highers

This past week has taken me east to west to east in order to go up, up, and up while still somehow gettin' down.  I've been busy but I'll try and keep it short.  Here's the story of 4 peaks.

Back in May I had a flight to run a Mountain Cup race in Helena, MT.  It was perfect, shuttle from the airport to the hotel, a hotel within walking distance to the start/finish area and a local brewery, and an opportunity to race in MT for the first time knocking another state of my list.  Plus the course was ideal for me with moderate climbs, a few long range views, and ups and downs over 18 miles.  Unfortunately my flight out was delayed.  And delayed and delayed until I missed all connections and couldn't get rerouted in time for the race.  I guess getting from Knoxville, TN to Helena, MT isn't the easiest to reroute.

Vail, CO
This race has been fast in the past as at times it was a qualifier for the World Mountain Running team.  I expected Jared Scott and Matt Byrne to show up to compete in the Cup so it'd be fast again this year.  I didn't know how fast it would get though.  Warming up I first noticed Simon Gutierrez (5th at Mt Washington), then it was Peter Maksimow (6th Mt Washington), and then Rickey Gates (1st Mt Washington).  Four of the six who beat me at Mt Washington and Jared Scott were all there.  This was going to be a challenge but I was confident.

The gun went off with Simon then Matt spurting out front.  I hung back a little bit with Peter but didn't want them getting away from me in the early flat first mile before the climbing.  They were moving.  The four of us hit the first mile marker in 5:05.  We hit the hill and I was finished.
http://connect.garmin.com:80/activity/embed/97089222
Jared went by me half a mile later.  He had his eyes up and I watched him continue to move up till he eventually took the lead on his way to victory and a buttload of Mtn Cup points.  Peter eventually caught and beat Matt and Simon was a few minutes in front of me.

It wasn't till 5 minutes after Jared finished that I got to stop running.  I went lactic very early and never got my legs back under me.  2300 ft of climbing starting at 8100 ft after a 5:05 first mile equaled pain every step of the way.  I worked hard the second half of the race trying to keep the 30 second separation I opened up the first mile over what appeared to be a young high school kid.  I was lucky to not get chicked.  It was that bad.

Never the less the view up top was great.  It was hard to be too upset.

Mountain Cup
It was hard to be too upset.  Until I started doing the math in the Cup standings.  Despite winning my first 3 races and even if I were to win my last race I can't mathematically win the series unless I get some help.  With just two races remaining and the final race typically not bringing in fast runners that needed help is unlikely.  I've been stewing a lot over Delta airlines not getting me to Montana.  Even if the Montana race had gone bad I'd have had opportunities to make up points elsewhere.  Now I'm out of options.  Vail has put both Matt and Jared in position to control their own Cup destiny and also helped Jason and Allison Bryant who didn't run.  Bernie Boettcher and Annette Bednosky of nearby Jefferson didn't finish in the top 10 and didn't earn points making the three of us Sunday's biggest sufferers in the Cup.

Bad Race; Good Climbing
With an extra day to spend in Colorado I decided to tackle one of the state's 14,000 ft peaks.  Turned out I'd do two of them.
http://connect.garmin.com:80/activity/embed/97089257
I mapped out a climb just a few miles off of I-70 that would hit two 14'ers in one hike if I had the time (Gray's and Torrey's peaks).  After a quick post race burger and pale ale at Pug Ryans (that's about how I felt on my way up the Mtn) I was off to the trail head in my Ford Fiesta Rental.

At this point I should mention the Fiesta had 4 miles on it when I first started it up.  A couple days later it'd be off roading along side Jeeps and other assorted souped up SUV's.  I apologize Hertz.
The hike was great.  It was a good way to forget about a bad race.﻿﻿  The trail started off pretty well groomed at the end of the tree line but it quickly turned into a technical rocky climb.  On the way up I met a few mountain goats. 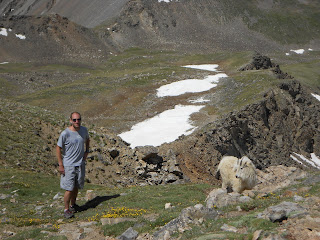 Eventually I climbed high enough that all vegetation ceased.  At this point it was either rocks, snows, or runoff.
It was 100 degrees in Denver so the temperature was pleasant even on the peak.  Even the wind was  mild.

As I got to the top of Gray's I hung out a bit, took a few photos, and decided to trek across the ridge to Torrey's Peak.  The beginning section was rocky and finding the trail was next to impossible at times.


Torrey's was just a mile away.  It provided a more dramatic drop off view.

Afterwards I headed to Denver to the Great Divide Brewery for a double IPA.  What a day!

The Bear Run
Oh boy.  Sunday I raced up Vail and hiked a pair of 14'ers.  Thursday I raced again.  The Bear Run has been my local race and this would be my 13th running in the 17 years it's existed.  I've won 4 times but this year I had a couple things not in my favor.  The first, fatigue of course.  The other being professional ZAP runner Chris Clark.
http://connect.garmin.com:80/activity/embed/97742932

My hope was that Chris would go out hard; pull a Woodsy at Vail.  He was smarter than that and lingered back with me through the first mile.  At that point he pulled away.  I would make a half hearted run on him in the flats before the track with the Highland Games Scots preparing for a festival.  As we got near he pulled further away and as we hit the steep final two miles I was ready to walk and let Daniel Amick go by.  I kept moving though and stopped hearing him behind me.  As I climbed to the switchbacks I actually opened up a gap on Daniel and began to settle in for 3rd.

The Bear's finish is always challenging.  I managed to not walk any this year.  I also felt I didn't have to dig too deep which may save my legs for some of the races I have upcoming.  My time showed the lack of effort as it was one of my slowest performances on the course.

Overall it has been an exciting and exhausting few days.  Traveling, working, racing, and hiking have all provided a lot of memories and a lot of fatigue. 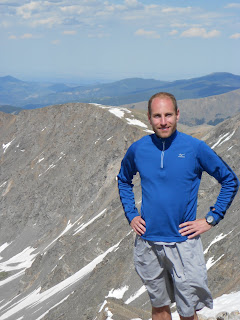 Next
Next Saturday is the state 5k road championship race "Beat the Heat."  I've had some good ones there and will probably be back.  The recovery has been short but this time I get a full 9 days.  If my legs don't start feeling fast again I may take the weekend off.  Or I may take the last mile off.  We'll see how it goes.
Posted by Ryan Woods at 6:47 PM