Pre Table Rock 25kOver the course of the week leading up to my final Mountain Cup race I was trapped on the exercise bike.  I was walking with a limp for several days after feeling the calf pop during the Beat the Heat 5k.  Wednesday Kadie and I flew from NC to California for a week vacation centered around the race.  I had yet to attempt to run at this point but was walking with much more comfort.  Thoughts of winning the race and the series were long gone now.

So with chances of winning at zero we rearranged the vacation to make the first stop Napa Valley.  Afterall if I can't push my cardiovascular system because of pain then why not make wine my prerace beverage of choice.

Napa also was home to my first attempted run.  I was able to cool down after Beat the Heat in a shuffling stride.  Five days later I ran 3 miles...shuffling.  I could feel a bit of an ache in the calf and it didn't feel "right" but I could shuffle pain free and I had confidence that I could attempt to cover the 15.5 mile race in two days.
4 miles pre raceday garmin
After Napa we drove down to Palo Alto, had lunch at Hobee's and went north through San Francisco (bad idea) to Mill Valley where we'd be staying for the race.  Attempt number two of running proved to be much more positive.  From the hotel on the paths leading into the mountains I did a 4 mile run and the calf was significantly less angry than the previous day.  There were less restrictions in my running form and I was quickly and comfortably running 6 min pace.  At this point I began to believe that I could possibly be able to compete but there were still 3 huge lingering questions:
1) Could I climb?  Climbing requires considerably more toe off.
2) Could I steeply descend?  The pounding of downhill running would surely hurt.
3) Could I cover 15.5 miles.  15.5 miles of climbing, descending, flats, climbing, then descending.

Table Rock 25k
Warming up at Stinson Beach for the race the calf felt  much like the prior day.  I quickly saw series competitors Jason Bryant, Matt Byrne, and Jared Scott as well as female competitors Allison Bryant, Annette Bednosky, and Ashley Arnold.  The one guy missing was Bernie Boettcher.  Bernie struggled much like I did at Vail and came away with no points.  He could have raced for 4th place but instead decided not to make the trip to 6 races.

So before the race started I had locked up 3rd place in the series.  To get 2nd or 1st I'd need to beat Matt or Jared who will be my teammates at the upcoming world mountain running championships.  I considered not running to ensure I didn't do any further damage but I'm way to stupid for that.

The gun went off and away went Jared.  Matt followed suit and I lingered behind the two of them taking careful note of every step and movement.  The first 3 miles of the race climbed 1500ft.  I was surprised that I was able to climb without much discomfort.  I was hanging in with the leaders and keeping them in sight.
Table Rock 25k garmin

But my gate wasn't entirely right.  Towards the end of the climb my right calf still felt ok but my left hip flexor was aching.  It was doing double time for the lack of toe off on the right side.  I was still moving well though and tightening the gap on the leaders when my dragging right side caught a root and I went face down to the ground.  This marked the end of my competition... unfortunately not the race.

This happened very near the top.  Hanging with those guys as long as I did gave me a huge gap on 4th place.  I didn't have any pain so I ignored my first opportunity to drop out.  My thinking was I could hold on to 3rd and put pressure on Matt and Jared to at least show up at the final race in the series and possibly a bad race by Matt could yield 2nd place in the series.  Just a little way on the down still felt good on the calf but near the bottom of the descent there was a series of repetitive tight switchbacks that inched down the mountain.  It was in the section, with the top two still in sight and less than a minute out front that things got bad.

It was the stopping quickly and accelerating that got the calf going.  I was noticeably limping from this point on especially on the flats and downhills.  9 miles away from the finish and 6 miles from my next drop out point.  Ouch. 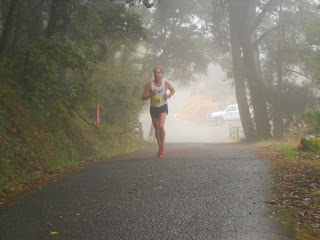 I still climbed the last 3 mile 1500ft hill well and 4th place was way back.  The last 3 mile descent to the finish got very ugly.  I was hobbling down the mountain.  My left quad was taking on double the load as I tried to ease the impact on the right leg.  The quad was now hurting just as much as the calf.  With about a mile and a half to go I was passed and there was no chance of holding off the runner.  He beat me by 2 minutes over that last two and a half miles.  I was 10 minutes back of Jared and Matt who finished in that order.
Bad idea racing.  I didn't need the points.

I'd also end up taking another week on the exercise bike for recovery.

Post race
Kadie and I headed to Yosemite for a few days.  We hiked Cloud's rest trail overlooking the valley.  We even lugged a couple of Mammoth Lakes Brewery's IPA's to the top and cracked them open looking down on the valley.  It was a good long hike the day after an injured trail race but I managed pretty good with some support from my black diamond ultra distance poles.  The next day it was a picnic in the valley.  Who'd have thunkt there'd be such a traffic jam for nature but what else would you expect in California.

Mountain Cup
Jared Scott would win the final Mountain Cup race and took home the overall title.  Matt Byrne would take second in the final race securing second overall.  After winning my first 3 races a poor race in Vail and an injured race in California would leave me in third place.  A Very disappointing end to the series for me as I obviously felt confident about defending my title 3/5ths of the way through the series.

In hindsight if I could change anything I'd make Delta not cancel my flight to Montana.  Had I raced there then I would have finished better than Vail and would have been able to take that weekend in early July off.  Instead I had way too many races in a row and was flat and then injured.  Thanks Delta.